As one of the hottest up-and-coming performers in the Denver area, Scotty Wiese is many things — performance magician, corporate entertainer, master of ceremonies, and talented mentalist. Wait a minute — what’s that last word?

Mentalism – It’s All In Your Head

Mentalism, in a nutshell, is a form of magic that focuses on the mind. Whereas many traditional magic tricks focus on spectacle and sleight of hand, many mentalist tricks can be performed entirely verbally.

When it comes down to it, mentalism tricks are mostly mind games. While Scotty doesn’t actually have supernatural, mind-reading powers (or does he?), there are many little tricks in mentalism that allow for the performer to deduce what the audience member might be thinking.p 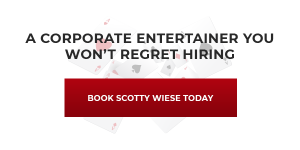 Keep in mind the examples above are exceedingly simple, and true mentalism performance acts will be much more awe-inspiring. For obvious reasons, Scotty’s best tricks can’t be spoiled here! But if you’re wondering how the examples above work, there are a few different examples.

As you can see, mentalism is a clever blend of tricky methods that allow the performer to predict certain outcomes, which ends up resembling actual supernatural powers. Since we don’t want to spoil the fun and reveal Scotty’s mentalism tricks here, why not book him for your next party or corporate event to see him in action yourself? We know that you’ll be enchanted by Scotty’s performance. Ready to book? Click here to get started!